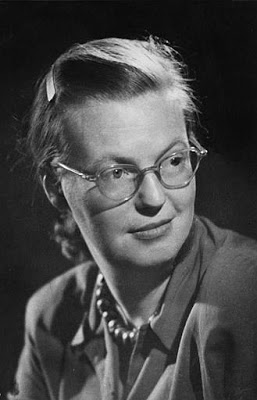 As T.W.O. would put it, that’s overegging the pudding a tadge.  I’ll never publish the most notorious and universal short story in American history.  More intimately, my husband is not a Kavorka Man.

But she and I both are housewives with strong intellectual drives living in whitopias where household help is only for weird inferior women who can’t manage entirely on their own or micromanage the bleep out of that poor cousin they did have come by a few days a week.  She couldn’t get nice college girls because mother’s helping was beneath them in 1950 and non-college girls were from families that hadn’t moved in 50-100 years and so they didn’t have anyone “strange” come help.  People tend to think college towns are all the same, but they operate along a continuum.  And Jackson was not in a college town where the degree was a MRS.

She also put her kids in preschool, which was called “community nursery school” and which 10-20% of women used back then.  Exact data is had to come by because of terminology and lack of collecting data issues.  And even back then it was the middle and up stay at home mothers who used it part-time and the smaller pool of working mothers using it full time.

I have her sense of anxiety and frustration, but not her pretty solid domestic skills. Our children find us odd but loving.  There is a sort of weirdly beautiful e-drama online somewhere where one of Stanley Jackson’s coed affairs is bragging about it on salon or something similar and Shirley’s kids post comments defending their mother and whaling on the smarmy coed selling the only interesting thing about herself. I was touched by the love her kids (one of which I think was a grandparent by now) had for her and their respect for her hard work keeping their home so it could be an entertainment vehicle for dad.

Stanley Jackson was a literary critic and professor who tomcatted around and expected his wife to produce both domestically and intellectually, but was jealous of her ability to get thousands of dollars for a handful of stories about women and children and often the domestic sphere.

I 100% do not think I can compete with the mad literary skills of Mrs. Jackson, but it’s reassuring in a strange way to know that this literary ninja had some of the same struggles I, a much more ordinary housewife, have sixty or so years later.

It also brings me back to wanting to smash conservatives in the face for chronically declaring that there was no widespread frustration among average women in the 1950s and during the WWII era and that anyone talking about it was just a loser who was unhaaaaappppy or a communist.  Shirley Jackson wrote for Good Housekeeping, for pity’s sake.  She was not writing some edgy scandal stuff like Peyton Place.  And yet there remain in both sets of writing much the same sort of struggles of women trying to adapt to the rapid shifts in technology, social roles and relationships with men.

One of the anecdotes in her domestic memoirs is about a pregnant woman she meets at the hospital when she has her third baby who is running late on delivering and is relieved and happy to be free of household tasks for what in the anecdote is about two weeks and heading into a third.  General audiences of women wouldn’t have wanted to read about stuff like that if it didn’t seem real.  They were very quick to write letters where they believed something to be unrealistic in its slicing of life.

Anyway I’ve only just begun reading her domestic memoirs and that sensation of being drawn close in time to a writer across so many seismic changes in daily life is dizzying.

There, I said it.  Women simply can’t do it.  Either the village is coming along for the ride of raising your kid(s) by coercion or they’re coming along willingly, but it’s still going to happen.  There are news articles from time to time about women that expect kids’ toy or clothing shops in a mall to watch their children for several hours while they go buy their own stuff.  These women are single mothers and they sure aren’t dithering about how terrible it is to have a strange person keep an eye on your kid for a couple of hours.  This is the brutality of making motherhood so hard that only women who really really really want children or are really really feckless will do it.  The women who become single mothers are the ones who will just create situations where other people have to help out.  The women who marry first are more likely to wilt alone until they crack under the strain.

In a bizarre confluence of toxicity, the worst sorts of “traditional” or “conservative” narratives on mothering as something a woman does alone intersect with attachment parenting, which also presents mothering as something a woman does alone (sometimes not even bathing or meeting other private needs without the child physically on her body).  In both cases, women are told “it’s going to destroy your children to have anyone else feed, hug, kiss or show affection and other care needs to them, even (in the most extreme forms of this narrative) your own husband”.

Forcing women to take the burden of caring for their own children as if it’s normal to care solely and with complete emotional absorption for your own specific children is another one of the reasons women have fewer children than they used to.

Single mothers forcing the issue in the opposite direction, demanding lots of concessions and tolerance doesn’t always work out for them, but it reveals that when facing having to mother alone literally, women are very quick to try their darndest to avoid that.

Comments open for 90 days on posts and pages, first comment moderated.  2021 revision. You will be moderated/banned for inappropriate speech, as determined by whim.